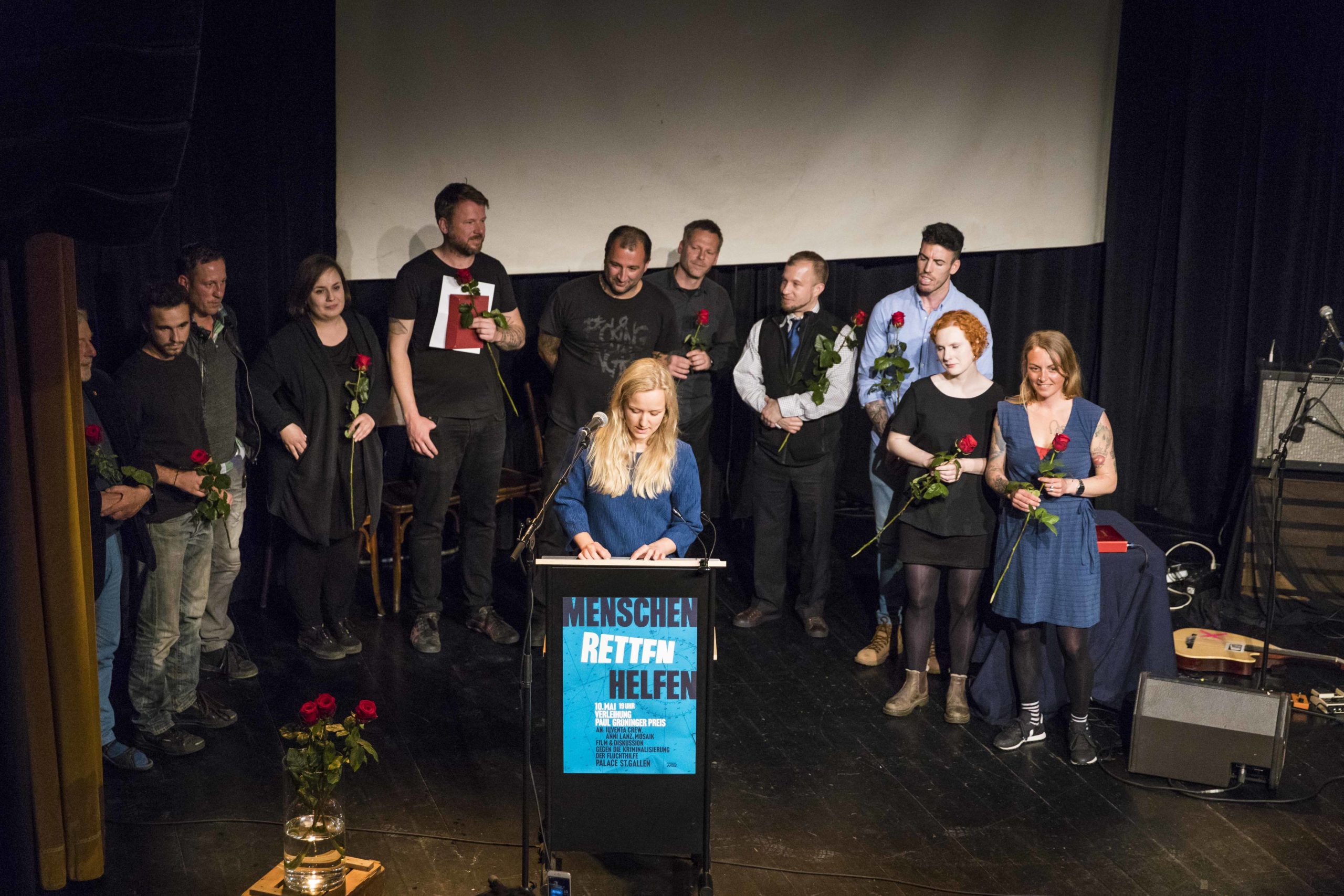 Honoured in Switzerland, criminalised in Italy

A terrible catastrophe has been taking place in the Mediterranean for years. Several tens of thousands of people have already died fleeing to Europe. Instead of providing aid, the European states are increasingly strengthening their border defences. Individuals and organisations are also being targeted as they rescue drowning people from the water and save their lives. Helpers are increasingly being criminalised for their actions: throughout Europe, including in Switzerland.

The Paul Grüninger Foundation wants to set a clear sign against these inhuman conditions by awarding its Paul Grüninger Prize, worth 50,000 Swiss francs, to the crew of the German rescue ship Iuventa. The Swiss human rights activist Anni Lanz and the Greek aid organisation Mosaik will each receive recognition prizes of 10,000 francs.

Iuventa crews have saved 14.000 lives in the Mediterranean Sea, Italian prosecutors have therefore launched investigations against ten crew members for „aiding and abetting illegal immigration“. The volunteers risk 20 years in prison. The Iuventa10 now receive a human rights award by the Swiss Paul Grüninger Foundation worth 50,000 Francs. „We really need the prize money to pay our lawyers’ fees. But I’d rather be at sea than at a gala in St. Gallen,” says Captain DARIUSH.

Militias have been fighting for power in Libya for one month now, 55.000 people from Tripolis region have been displaced since the civil war erupted again. Because search and rescue operations keep being criminalized, the death toll on the Mediterranean has risen dramatically. The Iuventa was the first rescue vessel seized in Italy in August 2017. One of the crew volunteers is ZOE: “I myself almost drowned once off the coast of Malta. I will never forget this feeling of helplessness, not knowing whether someone will discover my head in the waves.” The pictures on television of people drowning shook her up in 2016. A short time later she was on board the Iuventa, at the age of 20 one of the youngest crew members. Now the boat builder may have to stand trial in Italy, investigations about „aiding and abetting illegal immigration“ are ongoing.

MOHAMMED from Az-Zawiya in Libya has survived the journey across the deadliest border of the world. The 25 year old English teacher is living in Dresden after he has been granted asylum in Germany. “I owe my life to these people who didn’t even know me.” In 2016, when the passengers of Mohammed’s small boat had been floating in international waters for hours without a functioning engine, two crews came to his rescue: The Sea-Eye and the Iuventa. “I hadn’t eaten for three days, there was nothing to see except: water,” he remembers today.

Captain DARIUSH has steered the Iuventa three times off the Libyan coast. His comment on the trial: “We’re being charged for saving lives. This is absurd. It is European politicians who block any safe way for people in need, so we had to act.” The Italian public prosecutor’s office has been investigating the crew for almost two years. Covert investigators claim to have observed that the Iuventa crew is cooperating with smugglers. There is no evidence, say scientists at Goldsmiths University London. They have compared the accusations of the Italian police with all available data, meteorological measurements, logbooks and recordings of the Reuters agency. In their study for Forensic Architecture, they conclude that the allegations are false.

As a statement against the criminalisation of those helping people on the move, the Swiss Paul Grüninger Foundation is awarding this year’s prize to the Iuventa10. “The young crew members countered the failure of Europe’s humanitarian policy. They also inspired other people in Europe to not stand by but to act,” the board explained. The prize money of 50,000 Swiss francs (around 44,000 Euro) should also make a substantial contribution to the defence of the rescuers. The legal costs for the case are estimated to be at least 300,000 Euro up to the first instance. Another 200,000 will be spent on campaign and travel costs for the crew.

The lawyers assume that the trial will begin in autumn and that charges will be brought against the ten crew members. It is a precedent for Europe, says lead lawyer NICOLA CANESTRINI: “This trial will show whether Europe can continue to stand for fundamental rights and solidarity in the world“. This case is not just about the Iuventa10. Across Europe, people are prosecuted for standing in solidarity with refugees and migrants. Therefore, the crew has decided to invite criminalized from all over Europe to St. Gallen on May 10. Amongst others, Syrian rescue swimmer Sarah Mardini and Dragan Umicevic (Are You Syrious) will be invited on stage.

“The award in Switzerland puts the topic back on the agenda. This is important because it’s not us who suffer most from the process, but it is the refugees and migrants who suffer and whose lives are at risk,” says Captain DARIUSH. He knows that more and more families will dare to flee across the sea, as there is no end in sight for the fighting in Tripoli. The situation is particularly dangerous for around 6,000 migrants and refugees in the detention camps. “For us, this is about much more than fighting a case in court. We are on a mission to defend solidarity and we call on everybody who believes in a Europe of solidarity and human rights to join us“, says ZOE.